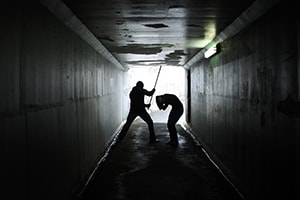 The Boston, Massachusetts criminal defense law firm of Altman & Altman represents assault & battery clients charged with crimes in the Boston area and in other cities throughout the Commonwealth of Massachusetts. One of our criminal defense attorneys would be happy to discuss your assault and battery case with you during a free consultation.

What is Assault & Battery?

In Massachusetts, assault generally constitutes a threat of violence, while battery refers to the unlawful physical contact of another person without his or her consent. No actual physical harm has to occur for an assault & battery charge to be filed—the alleged threat followed by a merely intended action, such as throwing an object at someone or attempting to push him or her—can be enough for police officers to make an arrest.

Bar brawls, a heated argument that turns physical at a ball game, or a discussion that turns into a shoving match between normally civil people may lead to assault and battery charges. A person who makes a threat using a toy gun may even be charged with assault with a deadly weapon.

The severity of any injuries inflicted on the victim or whether any weapons were involved are factors in determining whether an assault & battery charge will be considered a misdemeanor crime or a felony crime. Special circumstances, such as whether a minor was involved or the alleged incident involved domestic violence, can also be factors in determining the charges and punishment of a person who is convicted of assault & battery. Our Boston assault & battery attorneys at Altman & Altman have successfully handled charges related to restraining orders and domestic violence incidents.

However, not all incidents involving the threat of violence and unwanted physical contact are unjustified nor do they constitute the crime of assault & battery. A person accused of assault & battery may have acted in self-defense, in defense of others, or to prevent a crime from being committed. This is why you must hire a Boston, Massachusetts criminal defense team that is on your side.

Our Boston criminal defense lawyers at Altman & Altman are known for our effective legal strategies, which we customize to each case so that we can secure the best outcome possible. Depending on the specifics of your criminal case, there may be motions that we can file to suppress certain evidence or get the charges against you reduced or dismissed. If warranted, we may be able to reach a plea agreement with prosecutors. We will aggressively defend you in court if your case goes to trial.

Boston Criminal Lawyer Blog - Assault and Battery
Tell Us About Your Case
Criminal Defense
Personal Injury Practice
Client Reviews
★★★★★
Dear Sam, I can not thank you enough for your expertise in the handling of Chris's case as well as your sensitivity and caring attitude. toward him. I appreciate it from the bottom of my heart. He really expressed how good it felt to be able to talk to you! Sincerely and may God bless you. Pat W.
★★★★★
I really appreciate your prompt and highly effective assistance on this matter. After six different OUI attorneys told me that there was no way to recall the warrant and dismiss the charges against me without me returning to Mass from California, you managed to accomplish what they said was impossible. Thanks again! Neil D., Boston, MA
★★★★★
It took some 30 years,almost the loss of a job,fid card ,arrested ,etc,etc.i tried several lawyers,and got the same disappointing answer ;sorry ,nothing we can do;.One little phone call and back and forth on the iPad,and for the first time i felt positive that this issue could be resolved.MR Goldwyn,and Ms Aisa Fitzgerald told me their game plan,and they made it happen.I am a very ,very happy clam. Robert D.
★★★★★
Rick Floor is who I often to go to and he is amazing! Great customer service, and always exceeds my expectations but the whole office is always pleasant and helpful when I call or walk in! Em J.
View More
Submit a Law Firm Client Review