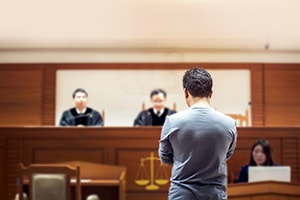 In many misdemeanor cases in Massachusetts, a defendant has the right to a Clerk Magistrate Hearing before a criminal complaint issues. The purpose of such a hearing is for the clerk magistrate to examine the facts surrounding the case and determine if there is probable cause to issue a criminal complaint. Clerk magistrate hearings usually occur in misdemeanor cases where police officers are not the percipient witness, except in the case of domestic abuse cases and can include cases of drunk driving, leaving the scene, or assault.

Because possible defendants are often summoned for clerk's hearings or a "show cause" hearings through a letter in the mail, rather than a formal arraignment or arrest, many people do not realize the seriousness of a clerk's hearing. They might assume it is simply a trip to the clerk's office to clear up a miscommunication, but these hearings are actually an important and potentially life-altering event. The stakes are high. This is your last opportunity to not have the allegations appear on your record. This case is because if a clerk decides that probable cause exists he issues the complaint. After the complaint issues, the next step is an arraignment.

Once you are arraigned for a crime, it's on your record even it if is later dismissed, and removing it later is a complicated and costly process. The best possible outcome is to have the charges against you voided, as if never officially brought. Then it is as if the incident never happened. Potential employers and others running a background check will never know about it. The sooner you contact a Boston/Cambridge defense attorney, the sooner we can begin investigating your case and working to clear your name.

What Happens at a Clerk Magistrate Hearing?

The person bringing charges against you will appear to read a police report or describe what happened. Usually this is a police officer, police prosecutor, or the alleged victim. They may call witnesses to offer additional testimony. You will also have the opportunity to testify on your own behalf, but depending on the circumstances of your case, your attorney may or may not advise you against this. Whether you are testifying or not, it is important to keep your emotions in check during the hearing, and let your attorney determine how to respond. The proceedings of this hearing are generally not recorded or on public record, and hearsay is permitted in the hearing.

Once all of the evidence and testimony has been presented, the clerk magistrate will decide if there is probable cause to support the charges and if he or she believes you should be charged. If so, a complaint will be issued against you. In some cases, particularly if you have no prior criminal record, the clerk magistrate might hold onto it for a certain amount of time to see if there are any repeat incidents or additional issues in that area. Then he or she might throw it out. Often, though, the clerk magistrate hearing leads to a trial that might have been avoided with the right legal representation.

Why Should I Hire Altman & Altman for My Clerk Magistrate Hearing?

The fact is that most clerk magistrate hearings result in arraignment, because the standard for proving probable cause is much lower than proving guilt. The clerk magistrate only has to believe that you might have committed the crime in order to issue a complaint. And if that happens, then it could be a much more complicated and lengthy legal battle. But by hiring an experienced defense attorney, you increase the likelihood that your case will be voided or dismissed. Our team of lawyers has the legal knowledge and experience necessary to ensure the best possible outcomes for our clients.

In a clerk magistrate hearing, for instance, that may mean calling in witnesses or negotiating with a police officer or alleged victim. Or there may be a legal reason why the case should not proceed. Most defendants are simply ill-equipped to represent themselves and would miss out on the opportunity to present themselves in the most flattering light possible.

Our knowledgeable team of lawyers represents clients who are under investigation or charged with crimes throughout Greater Boston and Massachusetts. We understand the seriousness of these charges, and our phones are answered 24 hours a day, 7 days a week to ensure that you can always reach us when you need to. If you are facing a clerk magistrate hearing, then contact a Boston, Massachusetts criminal defense attorney for your free initial consultation.

" I have nothing but positive things to say about this firm. I have never needed a lawyer before however, something came up very quickly that required me to seek legal counsel in a very short amount of time. Ian, called me with in a few hours of contacting Altman & Altman and was at the courthouse with me two days after. Ian was prompt and ready to hit the floor running. My case was settled with the up most satisfaction and I couldn’t of have asked for anyone else. I tend to be a tough critic, with that said… I am pleased to have worked with Ian and his firm… I am extremely satisfied. Not one question went unanswered and Ian did more than go above and beyond with my case. Highly recommended and I appreciate all that Ian and his firm has done for me. "