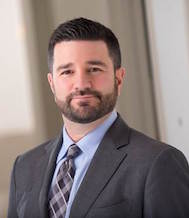 Steven C. Goldwyn is one of our Senior Criminal Defense Attorneys. He received his Bachelor of Arts in Political Science at Union College in 1989 and his Juris Doctorate from Boston University School of Law in 1992. He is a member of the State and Federal Bars in the Commonwealth of Massachusetts.

Steven has won many jury trials at both the District Court level as well as the Superior Court level. He has also tried and won Jury waived/Bench trials at both levels. He has successfully handled all types of misdemeanor and felony charges for his many clients.

Steven also supplements his busy Criminal and Registry defense practice by handling some civil litigation matters for our firm.

When Steven is not busy in court or in the office, he spends a lot of quality time with his lovely wife, Michelle and their 2 sons, Max and Noah. He also is an avid golfer, though, regrettably, his handicap has being rising consistently through the years. Steven travels when he can to Napa Valley and Mexico and enjoys fine dining, wine, beaching and relaxing. He also has traveled to Thailand, Brazil and the Cayman Islands. Steven also is an intense Boston Sports fan and makes sure to go to at least several Red Sox, Celtics and Patriots games per year. When younger, Steven was a good shortstop and point guard.